If teachers from a minimum of 10 different primary schools can attend an event, I will conduct a LIVE FREE 4-hour Podometic masterclass in India. This will eliminate any fears of maths either teacher or student may have. The events can be recorded and I will also make available ALL my notes handouts and PPT slideshows for free. 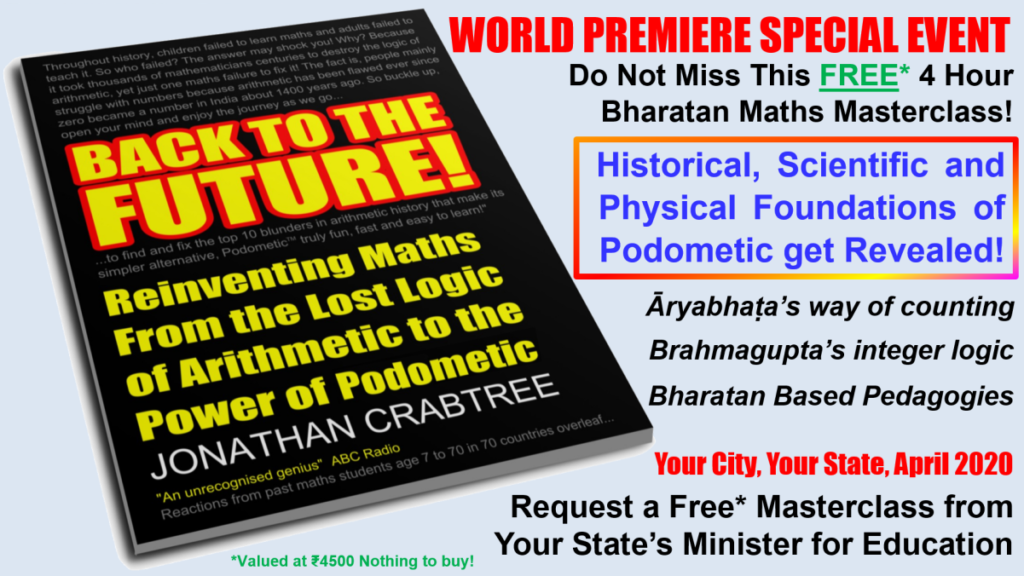 Being a world premiere, no mathematics education professor in the world currently has this priceless information researched, assembled and imagineered by me.

So, what EXACTLY did Prof. Dinesh Singh* say about my research?

“Superb lecture. Scholarly and yet easy to follow. I recommend this for parents, students, teachers of history and of math and for anyone interested in India’s ancient history and how India developed mathematical concepts way ahead of the Greeks and of Europe.”

* Prof. Dinesh Singh, chancellor K.R. Mangalam University is an Indian professor of mathematics. He served as the 21st Vice-Chancellor of the University of Delhi. For his services, he was conferred with the Padma Shri, the fourth highest civilian award awarded by the Republic of India.

Also, what did Kousik Sett say…

“By profession I am a mathematics teacher in a school in India. For me life is good for only two things. Learn Mathematics and Teach Mathematics. I must say, today your presentation was beautiful and fascinating. This is the best lecture on elementary and fundamentals of Mathematics I have ever seen. Thanks for giving us such a magnificent, powerful and thought provoking lecture on Indian Mathematics. It has immense importance in terms of originally and to established truth.”

… and what did Abhijit Majumder say?

“It was quite an amazing and mind-boggling experience to get acquainted with the commonplace errors we always make. Your inspirational lecture today is still ringing in my ears.”

Podometic restores Bharat’s (India’s) universal physical foundations to elementary maths and NUMBER SENSE. Notably quantitative symmetry is restored. It has been said, “Mathematics is the language in which God has written the universe”. It has also been said “God made the integers, all else is the work of man.”

In the pedagogy of podometic, numbers represent counts or measures of quantities. Our solar system consists of matter and energy and the least quantity of matter or energy you can have in a closed system is zero. Therefore, if numbers represent counts or measures of quantities and the least quantity in that system has zero mass or energy, then by deductive logic, the least number you can have is zero.

British primary maths pedagogies were built upon ancient Greek foundations in which 0 and 1 did not exist as numbers. Similarly, the ancient Greeks had no concept of negative numbers as their foundations were embedded in geometry. The number sense that should have emerged from the observation of our physical surroundings never emerged because western Integers were derived as a subsidiary secondary set of numbers after the Naturals, via subtraction. By contrast, Indian numbers had a one-to-one correspondence to opposing quantities, directions and forces. This is the essence of Brahmagupta’s definition of zero as the SUM of equal yet opposite (negative and positive) quantities.

Newton documented the laws of motion and gravity in his appropriately named 1687 book Mathematical Principles of Natural Philosophy (Physics). I have built a Newtonian system for primary level teachers that is WYSIWYG in nature. The maths algorithms emerge from playing with classroom manipulatives!

In contrast to Britain, India’s pioneers were empirical astronomers, not philosophers. It is no wonder number sense has been so difficult to teach when ideas such as negative numbers (quantities) being less than zero is a logical and physical non-sense. Podometic, is a science-based mathematics system in which all the lessons and ideas from Class 1 counting up to the Reals remain consistent with the laws of physics.

If as many say, maths is a language, then it is also important to teach the correct grammar of maths. As sentences are to equations, so phrases are to expressions. Currently, mathematics education experts do not understand the inbuilt mathematical grammar which drives the creation of correct algorithmic approaches. Perhaps the main reason why, is the fact that the West build their number sets and theory on the wrong core (Greek) model.

The Indian elementary mathematics model that should have emerged, yet never did, was built upon physics by astronomer scientists, generally ahead of the West by 1000 years. The current understandings of primary level maths the world has been following has confused people for centuries. Podometic strips back all the shoddy layers of paint to reveal the beauty of Indian mathematical ideas of Āryabhaṭa, Bhāskara and Brahmagupta in a new light.

It should be noted that all our base ten digits remain in place. It’s the step-by-step explanations of EXACTLY HOW maths works that is new. Notably, I will present a colour-coded framework for Classes I to VII+ that is focused on the elements of numerical calculation as applied to physical objects. I also explore number sense via simple geometries encompassing both positive and negative quantities. Interactive applets can also be used after the masterclass by teachers in their classrooms.

Not enough feedback? Have a look at these amazing comments.